We installed our first permanent connection to the Net, repatriating our web server from a local ISP, round about Easter time in 1997. At the time the best value available was still an eye-watering Ł7,200 per year, or approximately $11,500. We got it from Demon Internet who were pioneers of moderate prices for Net access. Part of the cost was always going to be hard to avoid because the circuit involved taking a 64Kb link to London, some 200 miles away. Over time Demon managed to keep reducing their costs but it was always frustrating to hear the kinds of prices that you could get in the States. In fact when our 64K started to fill, we managed to offload about 90% of the bandwidth with a bit of crafty analysis of where it was going (mostly images from some of the commercial web sites we hosted) and then renting space from Verio in Utah to serve it. We spent an extra $55 per month and got nearly all of our bandwidth back again.

Because of the cost we were always ready to entertain people who called us up trying to sell us cheaper bandwidth, though few ever sounded plausible and the savings would have been marginal in any case. Then before Christmas 1999, we got a call from Tele 2 to say that they had a franchise in our area for `wireless leased lines' — data links delivered by radio. The prices and the bandwidth looked attractive, plus there was apparently a special introductory discount on the installation. We signed up, asking for a class C block of additional addresses to be allocated. Then it all went silent. It would be unfair to accuse Tele 2 of serious disorganisation, but it has taken a very long time to get anything installed and it's usually not been until we ring them that any information has been forthcoming. During the intervening period, their prices have dropped from good to extremely appealing. At the time of writing they are charging Ł199 for 256K (the lowest leased-line bandwidth they do, though there are other services listed). Apparently our bandwidth can be remotely increased up to 2Mb without any equipment changes. You can use it as an ISDN substitute starting at Ł35 per month - which for a permanently-on service with a fixed IP address sounds like a bargain.

Their response to yet another follow-up call last week caused complete surprise — a promise that we would be a priority because of the delays so far and, yes, an installer would ring back. So we expected another month of silence, but to general astonishment a phone call followed with a promise to turn up and install the link the next morning at 9. To similar surprise, a cheery man with a van and an assistant did indeed turn up more or less on time.

First off came the `site survey', i.e. stick an aerial on a pole and wave it around looking from signals from the base station. The geography here is not very favourable, with us half way down the side of a steep hill (Bradford is a very bad place to cycle around), but it turned out that we are just about line-of-sight to a hilltop across the valley where there is a TV repeater and one of Tele 2's access points. (The place in question is `Idle' and is famous as the home of The Idle Working Mens' Club). Despite the fact that we are shielded by trees our installer announced himself more than satisfied with a very strong signal and so the permanent pole and aerial were installed. The thing on top of the pole is probably about a foot square with what looks like a good chunk of the electronics in a block bolted on the back of it. A thin coaxial cable then comes down into the building. According to the installer the system uses a band at around 3.2GHz, so line-of-site is very important and anything much getting in the way is a problem. Since it's summer and the trees are in full leaf, we won't have to worry as we might have done if the system went in in winter and the tree effect couldn't have been predicted.

The cable terminates in the building in something called a `speedbox' which takes the coax, a power lead from a laptop-like power supply and provides a standard twisted-pair Ethernet connector. The box is half the size of a typical 8-port Ethernet hub — it's tiny. Our installer plugged in his laptop, tested it to check that we were getting data and then left after telling us the IP address that we got initially (212.19.86.71) and that the default gateway should be 10.somethingorother. Business meetings intervened, so it was a couple of days later before the device could be put to work under Linux.

We still haven't had the formal documentation — presumably some will be coming - but it was far too exciting to leave it all unconnected, so configuring a Linux box to provide a firewall got urgent attention. There didn't seem to be much chance that the default gateway really could be 10.anything so there was quite a bit of puzzlement about how to configure the routing and at first all attempts meant that we couldn't get any traffic in or out. What should the gateway be? How could we find out? Inspiration struck - try a `traceroute' to see where packets get dropped - and up came the address of the gateway. With that plugged in to the routing, suddenly were were up. We still don't have any information about our block of addresses. Judging by the ping times the speedbox provides a kind of proxy ethernet connection to the remote point - so when our systems issue an ARP for that address, though it's on the other side of the wireless link, the speedbox responds with its own MAC address. You can tell that because it shows up in the ARP results yet takes noticeable time to ping:

So far so good, downloading various upgrades to the Real Audio player this weekend the FTP download speed has been about 30-32KB/sec which is just what you would expect from a 256Kb/sec line. Presuming that we get the documentation that we are hoping for, plus they sort out some of their promises, mostly

it looks as if we will be happy. There are some pictures below of the antenna and the trees that it works through. Overall — relatively painless installation and it works. Being the only user on 256Kb is really nice!

View of the trees (through a window, sorry about the reflections). There is just the one stand of trees and clear space can be seen beyond them — hence the low signal attentuation. 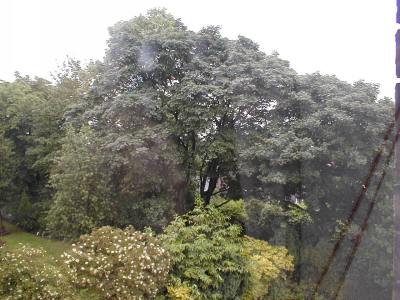 The aerial attached to the house. This is huge old Victorian house, so the scale of the window may mislead you. 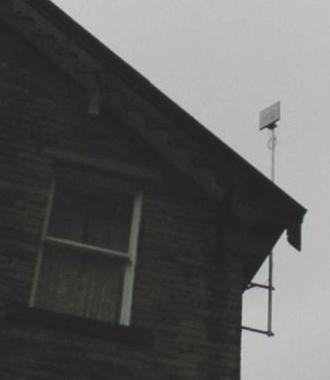 Well, there was bound to be a catch. Unfortunately you only discover after the event, but here are a few of our lessons.

Recent telephone calls have sharpened things up. The long silence after our last ineffectual conversation finally flushed out some embarrassment and we got called by the IP address admin and their Linux bod in fairly rapid order. Neither were able to do anything for us, but at least left us feeling that someone is finally taking notice. However, words are cheap, it's action that we want!

Conclusions: not bad at the price, but unsuitable at present as a `leased line'. Better thought of as something else. We will still have to keep our Demon connection, but might move some of our less mission-critical outbound bandwidth onto the link.